It could take up to three months before I know anything though.  The board did say that they were going to charge the Doctor on one charge.  My investigator made a surprise visit to the clinic and he made other allegations against the Doctor along with mine – then they were grouped together for one complaint.  The letter that I received from the Board had the Doctor charged with 5 different charges:

I ask the investigator if the Board had only found the Doctor guilty in "one" of the above five charges during the “informal hearing” or were they all being grouped together as "one" charge.  He said he couldn’t give me any details until it is public record……but he did say it ALL was one charge grouped together!!!

He said the Board would draw up their recommendations tomorrow (which would be today)(6/28/2011) and present them to the Doctor.  At that time the Doctor could either sign off on them or hire an attorney to fight the charges during a hearing.  If the case does go to a hearing it could take up to  three months before there is a settlement.  The investigator ask for my pictures of Spanky, he said that it was good to be able put a face with the name during a hearing.  I had a framed picture of Spanky with me, it was the last picture that I took of Spanky and it was during Christmas 2010.  I gave it to the investigator and ask him to BE SURE and let everyone see Spanky’s little face….and he  said he would.

It was hard but I got through it and I am so glad that I pursued it.  I thanked the investigator for his help and he said that the Veterinarian Board is there to protect the animals and that if people didn’t report these things then the Board had no idea that bad clinics/veterinarians needed to be investigated.  He said that the Doctor was NOT going to be able to continue this type of behavior and that they would let me know what happens as soon as they could. 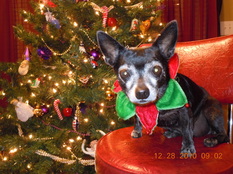 I received a call yesterday 6/29/2011 from the lawyer for the Texas Veterinarian Board, she wanted to know how much money I have spent on this case since the first day that I took Spanky in for surgery.  Actually I have not spent anything except for the initial surgery cost.  The doctor did not even charge me for the cremation or urn.  She said that I will be getting all the money that I have spent back.  I am not sure that is what I want.....when I filed the complaint it was not because I wanted my money back - it was because I do not want the Veterinarian to be able to continue this type of behavior or hurt any other animals.  Sooooo.....today (6/30/2011) I sent the following to the Veterinarian Board's lawyer:

I have been thinking about our conversation from yesterday.  At first
I thought it was a nice offer, but in my heart I want to say that
getting my money back was not the goal of my complaint.  I don’t
want the money back and I don’t think I could even spend it if I did
get it back.  My intention for this complaint was to make sure that
Dr. __________ is stopped.  He is stopped from doing this to any other
animal.

Can you please advise me on the Boards reasons for returning my
money?  Please, please tell me that returning my money is in no way
considered a settlement….or could be construed as making me whole
in resolving the problems that are evident at the ______  _______ Vet
Clinic.

Thank you for your help.

I have not heard anything back..... and still waiting ......
7/1/2011
I did receive a call back today and the lawyer said that it is common practice for the money to be returned as restitution.  She said in no way was this going to be the only punishment that the dr. would receive.  The Vet Board knows that there is a problem at this clinic and giving the money back was only one (1) part of a five (5) part penalty that will be offered to the dr.  If he does not except it, then we will go for a trial to withdraw his license.  I have to get the word out!!!